The Asus rog GL503 abandons most of the design characteristics you would expect from an Asus gaming laptop.

The Asus rog GL503 is a laptop that suites the gamer in his home as well as the professional in is office, in the process of doing this the Asus rog GL503 packs enough hardware to suit both type of people while retaining a price tag around a thousand dollars.

How well does the Asus rog GL503 fair in this quest, below is a quick scan of its features;

The Asus rog GL503 comes in black with red accents only featured on its heat sinks. This is a very rare design when it comes to gaming laptops from Asus.
Most Asus gaming Laptops usually feature red RGB stripes on the lid and on the bottom plates, but that is not the case here. Only the rog logo glows red on the lid. 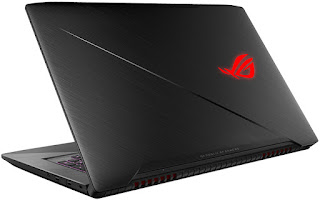 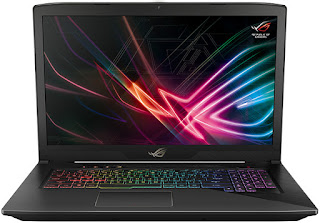 This way the a professional won’t feel weird when he pulls this laptop out of his bag.

Ports on the Asus rog GL503 was also designed to suit both parties.

On the right side you have a usb-c port with no thunderbolt support, 2 usb-A type 3 ports and an SD card slot.

On the left you gave an Ethernet port, a mini display port, an HDMI port, 2 usb-A type 3 port, a 3.5mm headphone/microphone combo jack.

The bottom plate doesn’t come off easily as the ones on most laptops do, but there is an opening that gives you access to a single ram slot, SSD slot and a HDD slot. 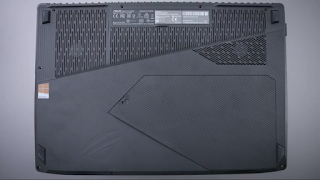 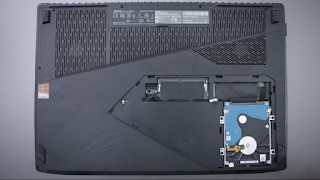 The keys on the keyboard are neatly arranged, on the top left corner of the keyboard you have volume control  keys as well as a special button that opens a software that allows you control your gaming performance and thermal control. The keys on this keyborad have a  travel of 1.8mm, it’s RGB and the RGB lighting is  controlled by asus AURA software. 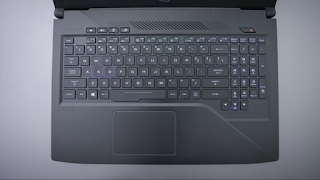 In addition, the keys on this keyboard has OVERSTROKE TECHNOLOGY that moves the activation point close to help keep with the repeated action required by fast placed game play.

The mouse pad on this laptop is driven with Windows precision driver’s.

Moving on to the hardware, the hardware on this laptop is nothing to be super wow about. It’s a laptop that falls within a $1000 budget, but it doesn’t mean you will be disappointed, buying the Asus rog GL503 is a good deal.

This laptop features a quad core Intel core i7-7700HQ processor, 16GB of ram DDR4 24000MHZ, a Nividia GTX 1050 graphics card that provides 4GB of graphics memory and a one tera byte HDD storage.
As said earlier there is room for upgrade via an opening in the bottom plate.

Asus included a dual thermal tech to keep everything cool no matter the workload on the laptop.
The dual thermal cooling tech gives each chip it’s own heat sink and powerful 12 volts fan to ensure optimal cooling.

Powering all these components is a 64 watt hour battery.

With this configuration the following games gave these frame rates on average settings;

If you read this article from beginning to end, you will discover from my words that I really love the Asus rog GL503.
If I were asked I would say this laptop is a  best buy with a $1000 budget.