The existence of a laptop with a core i9 processor actually sounded like it would never happen and if any laptop were to feature it, the laptop will be super bulky.

Well as you already know, technology and science have actually shown no boundaries in recent times.

The computing giants MSI has released a laptop that features a core i9 processor with six cores. Though the laptop isn’t far from the Acer predator and MSI GT83VR size category, it is far more portable when compared to what a core i9 Laptop would look like back in January when imagined.

The MSI GT75 is the first laptop produced by MSI to feature a core i9 processor.

In this article I am going to be giving a quick review of the specs and features of the all new MSI GT75.

Taking off with the design, the MSI GT75 looks a lot like the MSI GT83VR in a more compact shape , sort off.

Just like the MSI GT83VR, the MSI GT75 features two big exhausts at the back. There are also two LED strips on the Lid.

Opening the lid of the MSI GT75, you are greeted with 17 inch Full HD 120Hz G-Sync display.

The MSI GT75 features a low profile mechanical RGB keyboard, which MSI is ringing a lot of bells on.
Every key press responds with a distinct click and a discernible amount of physical feedback

If you ask me, the palm rest / Top base, actually has am Asus Rog vibe to it. Am not actually sure why.

Being a beast of a laptop, the MSI GT75 has a lot going for it on the hardware/performance side. It packs serious hardware specs that is aimed at satisfying the over ambitious gamer..

On top of adding more cores to the mix, Intel’s mobile Core i9 chip adds a little more performance through what the company is calling Thermal Velocity Boost. In this mode, users can expect 200 extra megahertz of performance to help them get through taxing workloads.

The MSI GT75 has a lot going for it and is actually a best buy for those who can afford it, because the laptop is not coming cheap at all. 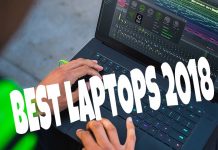 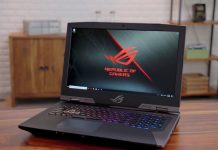